This morning, Kady thought breaking up with Ezra was the hardest thing she’d have to do. This afternoon, her planet was invaded.

The year is 2575, and two rival megacorporations are at war over a planet that’s little more than an ice-covered speck at the edge of the universe. Too bad nobody thought to warn the people living on it. With enemy fire raining down on them, Kady and Ezra—who are barely even talking to each other—are forced to fight their way onto an evacuating fleet, with an enemy warship in hot pursuit.

But their problems are just getting started. A deadly plague has broken out and is mutating, with terrifying results; the fleet’s AI, which should be protecting them, may actually be their enemy; and nobody in charge will say what’s really going on. As Kady hacks into a tangled web of data to find the truth, it’s clear only one person can help her bring it all to light: the ex-boyfriend she swore she’d never speak to again.

BRIEFING NOTE: Told through a fascinating dossier of hacked documents—including emails, schematics, military files, IMs, medical reports, interviews, and more—Illuminae is the first book in a heart-stopping, high-octane trilogy about lives interrupted, the price of truth, and the courage of everyday heroes.

“Perhaps bravery is simply the face humanity wraps around its collective madness.”

WHAT IN THE WORLD DID I JUST READ?!

THIS BOOK IS FREAKING GENIUS!

I am not lying when I said this book is one of the most creative book ever written! Reading this book makes me feel as if I am the law enforcer who reads and check through documents. This book has unique forms of writing. Instead of long paragraph, the case is being told by number of documents like emails, files, interviews and more. The sample goes on like this: 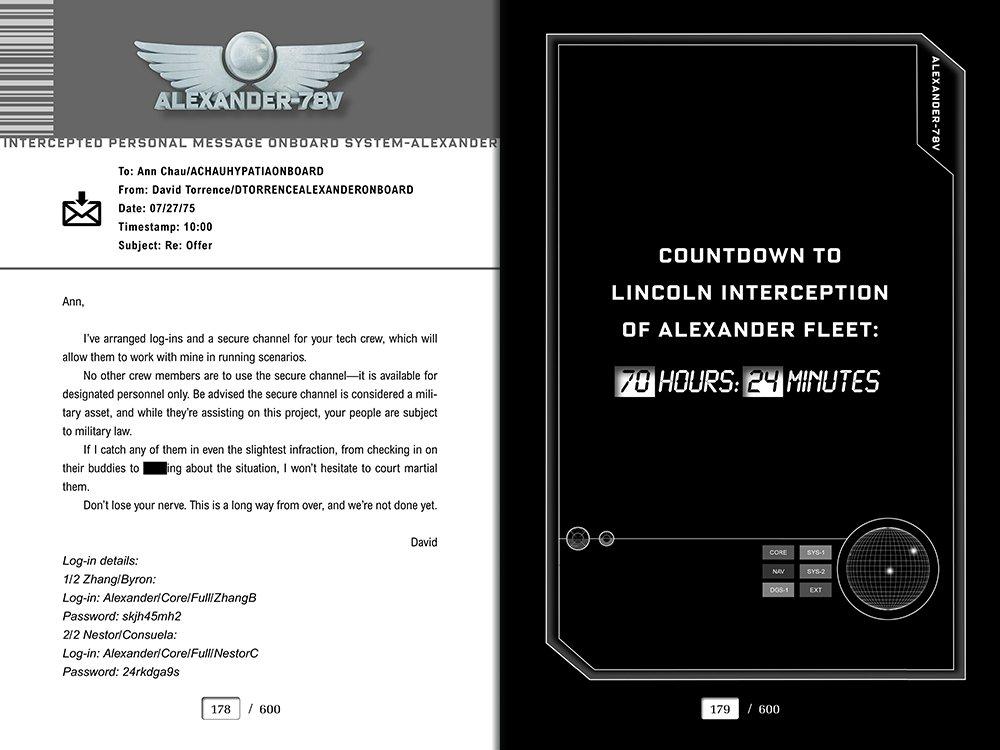 Unique right? Unique and definitely flawless! It brought you to unlimited imaginations that you will never imagine. I love everything about this book! So the story start as Kady Grant dump her boyfriend – Ezra Mason. Well, she picks such a good day to dump her boyfriend when their planet is being attacked and invaded. They all have to fight for evacuating fleet to survive. Kady and Ezra manage to help each other before separating and part ways.

What if the evacuating spaceship is also not safe? Nowhere is safe. A deadly plaque has just broke out and AI or artificial intelligence might have been their enemy all along. Many have died and Kady has to find a way to free thousands of lives. With Ezra on the other spaceship, they fight their way for their survival and free innocent lives.

I love the plot which is super nerve wrecking and I love the the fights and actions. There’s fights everywhere. Spaceships fight, survivors fight, too clever computer program which fights the scientists and the military squads which is superb. As a hacker, Kady not only need to be smart but also agile in escaping and have good reflex in combats since no one is available to protect her but herself.

Not to mention the humour is just priceless. How can this book be so serious yet humouring at the same time?! Have I mention the cute relationship Kady has with Ezra? Super duper cute and funny!

This book is a masterpiece. There are always unexpected twist and surprised from the beginning until the very end of the story. This book will send you chills and for sure you will crave for the next series after you finished this reads.

“Part of being alive is having life change us. The people around us, the events we live through, all of them shape us. And that’s what I think you’re afraid of. Maybe not of dying. But of this you, the you you’ve become, ceasing to exist.”